I have a habit of coming up with projects I want to do, running out and getting materials for it, and then carefully putting it away with my huge artillery of craft supplies… and completely forgetting about it. This is pretty counter productive until I come up with another project months later and remember that I have just the tool I need to get it done! A prime example is this small resin kit that I bought an embarrassingly long time ago with aspirations of making resin-domed jewelry. I may not have had anything I wanted to preserve at the time, but more likely is that I had a beautiful pressed flower or some other amazing piece that i did want to use, but was too scared to try a technique (resin) that I’d never done before on something I liked so much and risk an imperfect result. Its like how you get a bottle of really fancy body wash for christmas and put it on a shelf for “special occasions only” and then never use it. Luckily I’ve overcome my fear of using up art supplies and body wash, because hey, if you don’t use it then you don’t get the chance to enjoy it right?

Anyway, about the butterflies! One of my good friends worked on a CSA farm last year and during his time there, found and collected quite a few wings from a variety of different types of butterflies. I would never condone killing butterflies just for their wings (which would be comparable to killing an animal for its fur in my opinion) but once it has lived a full and happy life and died naturally, I see nothing wrong with collecting its beautiful, delicate wings to give them a new life! He showed me his collection of wings the other day and I immediately remembered a gorgeous necklace I used to own made from a blue butterfly wing. I figured this was a perfect time to try out that resin kit that I had! He generously offered to let me experiment on them and keep some of the finished products. I ended up bringing home over 40 individual wings, some in matched pairs!

Not all of the wings are perfect and many have holes or tattered edges, as you would expect after a full life of use. This was actually kind of nice because I used the least intact ones for my practice runs without worrying about “ruining” them. After laying them all out and seeing what I had to work with, I started to get nervous. I guess I haven’t totally gotten over my fear of imperfect crafting. I read all the instructions for the resin, and realized that I didn’t have anything to use as molds; silicone is preferred, and I’ve made silicone molds before, but I didn’t have any on hand. I checked the internet for alternative resin molding products but I didn’t find much; the most promising methods seemed to be making a mold from cut and folded paper, or to simply laminate the wings. I decided to try both. 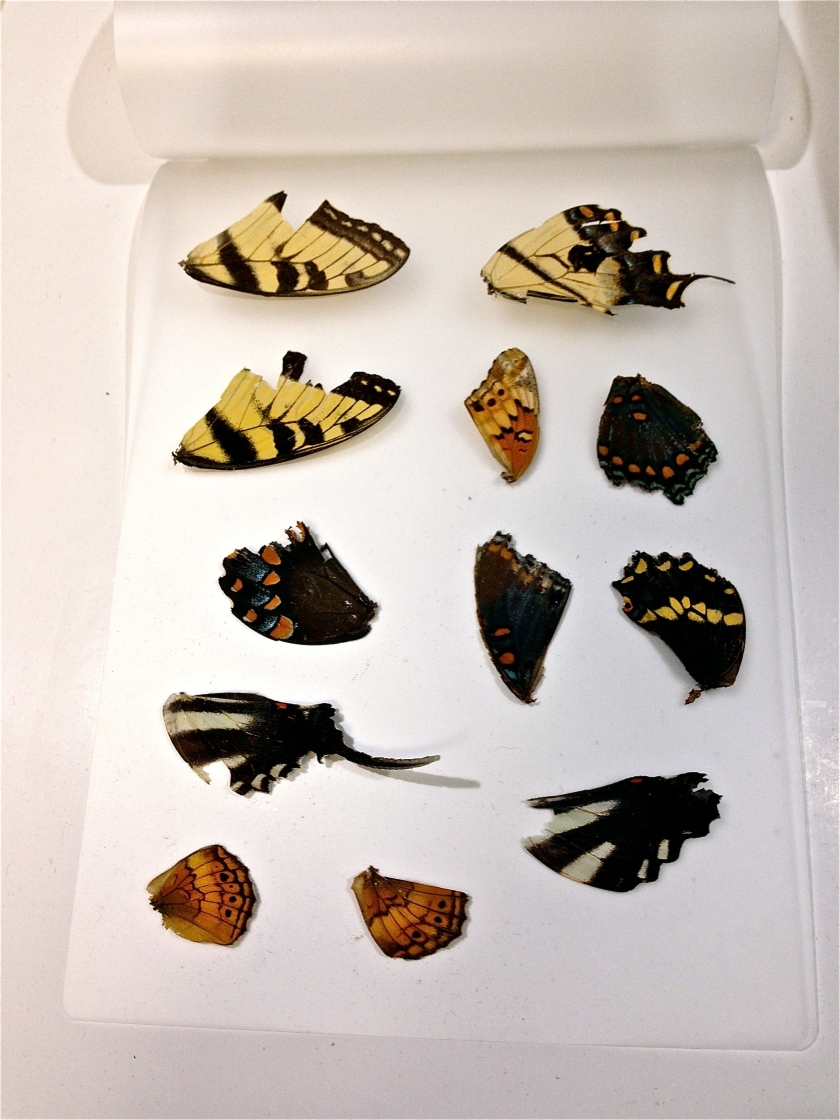 I started with lamination, using a Xerox Laminating machine that my grandma had. I laid a selection of wings out on the photo-size laminating plastic, folded the top page of the plastic over the wings very carefully, and put the whole thing into the cover booklet that comes with the machine. After the machine was pre-heated I simply slid the booklet through the machine and waited as it sealed my wings inside! 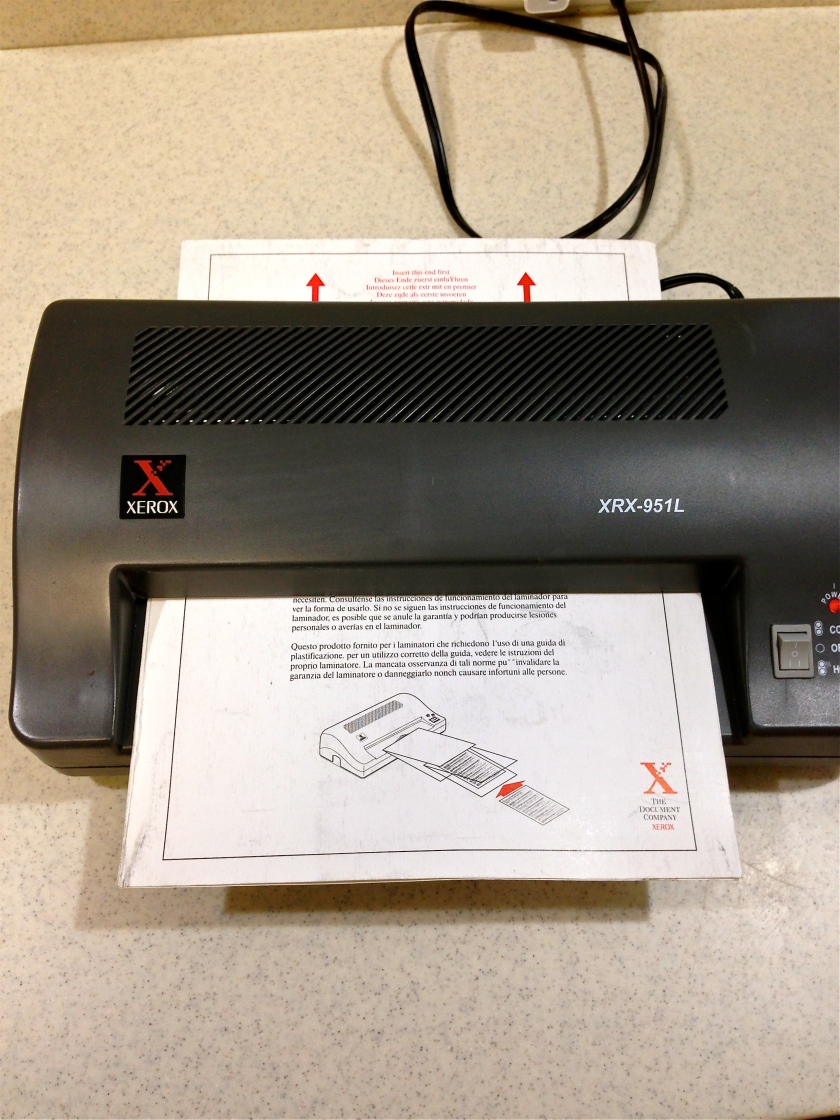 I give the finished product here a rating of about 6.5/10. The laminating paper sealed up pretty well, with only a few bubbles and pock marks between the two pages, which is irrelevant for me because I planned to cut the wings out individually. If you wanted to use the entire page without cutting out the wings this would be a very visible issue, although practicing with the laminating machine could potentially help. The wings are all sealed well with a small outline of un-laminated space around them, as is expected with laminating. They do have a slightly plastic look where air is trapped around the veins of the wings, but I think this is unavoidable.

After cutting them out from the page, they are very light but sturdy. The only issue I have is that they can bend slightly, and because of the powdery coating on the wings, when bent the wing tents to buckle slightly inside the laminate, popping away from one side of the lamination plastic. It has consistently popped back to its original placement so far but I think with time this could cause the wings to deteriorate. After finishing laminating the wings, I moved on to the resin. I traced three wings on heavy card stock, 1 laminated wing and 2 un-laminated, leaving just a millimeter or so around the edges of each. I cut them out leaving another 2-3 millimeters around my drawn outline, and then cut slits into the paper so that I could fold it up to make a mold (I forgot to take pictures for this part unfortunately). I taped the insides of the walls to eliminate potential leaks and then mixed the resin according to the directions. I mixed only 2tsp total of resin and was able to fill all three molds perfectly with that amount. I started by coating the bottom of the mold with the resin, then laid the wings onto the wet resin. I positioned the wings with a toothpick and tweezers and scooped out the largest bubbles before coating the top of the wings with resin as well. Again I scooped out excess bubbles and tried my best to center the wings in the molds. And then I waited! 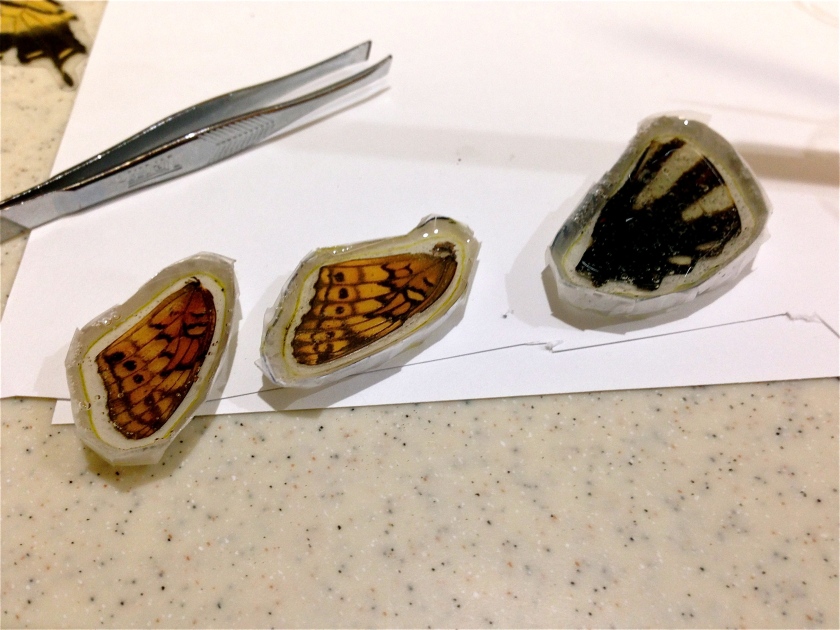 The resin gets about a 7/10 at this point. It is much more difficult to do than the laminating (which to be fair, is VERY easy), and it takes 48 full hours to cure. The time issue would be ok if I knew exactly what I’m doing but since I’m experimenting and only did 3 at a time, it drives me crazy to have to wait so long between tests! The paper molds are also just ok, they get the job done, but are tedious to make. They were easy to remove around the taped edges but I left the bottom untaped- big mistake! The paper on the bottom stuck very tightly and I had to soak it in warm water and then scrape it off, much like a stubborn sticker or price tag. The taped areas also are much smoother and clearer than the bottom now that the paper is removed. The resin itself is waterproof, fairly lightweight, and solid, if not a little bendy. It feels more like a thick rubber than I expected; I was hoping for more of a rock-hard finish. This could be because of a number of factors including the thickness of the piece (I made them only a few millimeters deep) and the possibility that I mixed the resin incorrectly, although I was careful to use even amounts of the resin and hardener. There are also some bubbles on the underside of the wings that I couldn’t see/reach with the toothpick when the resin was soft, although this seems unavoidable. The final issue with the resin is that it does remove some of the iridescence the wings originally had; the resin holds the color but the shine has dramatically faded. Overall, I think this project was a success although it didn’t turn out as beautifully as I had hoped. Glass would be the ideal covering, with a welded metal casing. Unfortunately I don’t have glass or metal working tools available to me! I’m going to continue experimenting with the resin as well as with the laminating and may even look for more options. Very thin plexiglass or plastic coverings might work although I have no idea how I’d seal the edges. I’d love to perfect the technique for this as I think the possibilities of found objects could be endless!

The Potters Guild of Frederick

I’ve been a member of the Potters Guild of Frederick for a while now, and recently, I took my...

I’ve been making these cute little jars recently! I love the different handle style on these ones. They would...

One of my duties at the studio is to measure and combine the dry ingredients for glazes before hydrating...

I’ve been making a lot of mugs lately and they’ve been turning out really well! However they do all...

Anyone who has ever worked a retail job of any kind probably knows how frustrating inventorying is. What makes...

Glazing has always been one of my least favorites steps in pottery making. It can really make or break... 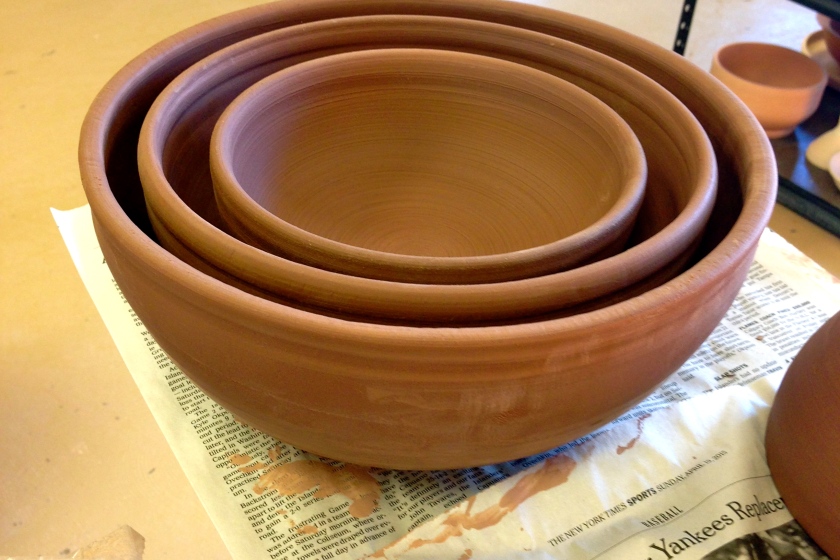 I haven’t written much of anything recently because I’ve been insanely busy. I feel like I constantly am doing...

WIP of the Week: Plant Hangers and Multiples!

Yesterday might have been one of my most productive days at the studio ever! Besides these AWESOME hanging planter... 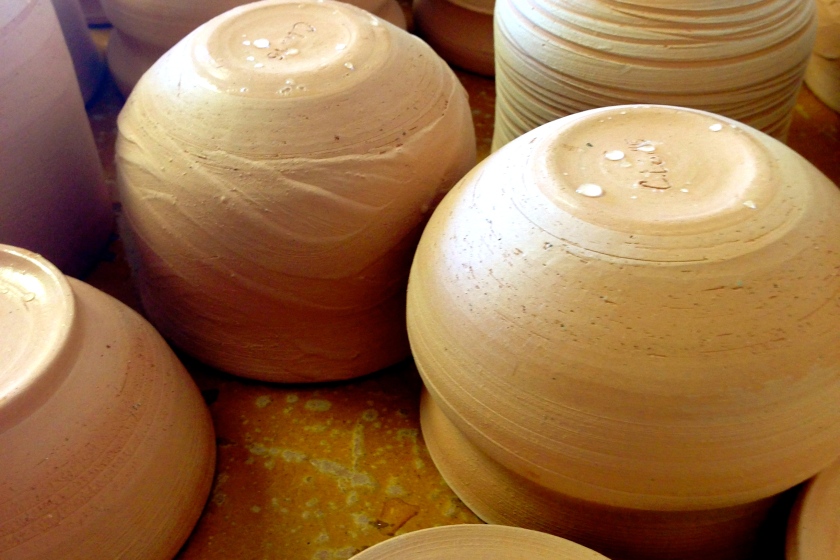 WIP of the Week: Glazing Day!

Lots of glazing to do today!! I had tea bowls, candle plates, some brie bakers, and some large vase...

A few days ago I replied to a call for entries to the DC Realists exhibition, and I was...